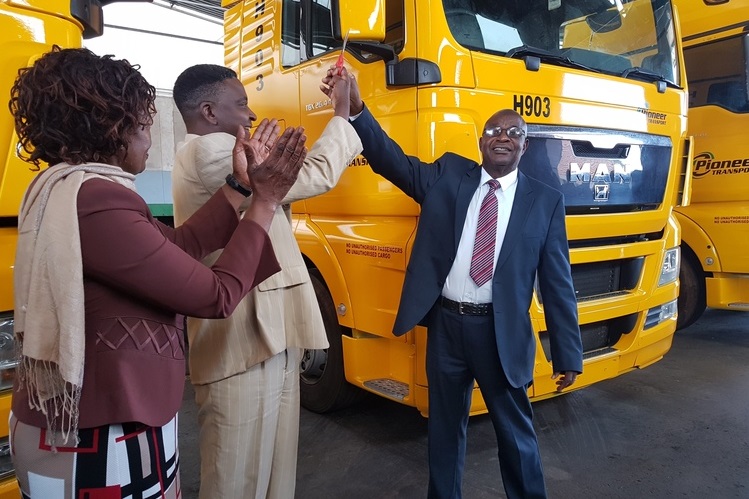 Pioneer Transport, a former Unifreight subsidiary, has secured an investor, Lamcent Capital Pvt Ltd as it seeks to enhance its operations. The transport company last week commissioned 10 trucks as part of strategies being undertaken to take the company to new heights. “I finally found an investor, Lamcent Capital who accepted to invest money in Pioneer Transport and this involves selling on credit, 10 horses to the company to be paid over a period of 12 months.

“The investor will also invest further capital in the company in the form of 14 trucks as equity to the company and providing tyres for all trailers and existing trucks.

“In 2015 the weakening of the South African rand against the United States dollar negatively impacted the business as the company’s cash flows were affected and it could pay its creditors as per original agreement,” he said.

Pioneer Transport was formed in 1999 by Simon and Hamish Rudland and was a flagship brand under Pioneer Corporation Africa Limited.

The company concentrated full truck loads on both local and cross-border transport routes, the yellow trucks becoming a well-known vehicle on the roads in South Africa, Botswana, Mozambique and Zambia.

Since 2013, Pioneer Transport had not been meeting revenue targets and the employees decided to take a positive and pro-active approach and presented the proposition of a management buy-out to shareholders Unifreight Africa Limited.

A negotiating committee was formed, lawyers were engaged and dialogue commenced with Unifreight Africa Limited on November 17, 2014.

In April 2015 a settlement agreeable to all parties was reached, effectively handing over ownership of the company to the employees with effect from January 2015.

Subsequently, the company was placed under judicial management in 2015 after its assets that included trailers and trucks were attached over its $1,7 million debt.

Mr Sibanda said Pioneer Transport has capacity to operate as a going concern and is not a candidate for liquidation.

He said the judicial management team is at the moment working on recalling employees who lost their jobs when the company was facing challenges.

“The judicial manager is going to recall 10 drivers to come back and the other drivers will be called once the other 14 vehicles arrive,” said Mr Sibanda.

To keep up to date on Lamcent Capital and our portfolio companies, please follow us on LinkedIn.